This Swiss ski chalet is the top two floors of a new build block of residences. The English owner having spent many years skiing in the same resort decided it was time to invest in a property which could be used for the whole family throughout the year. 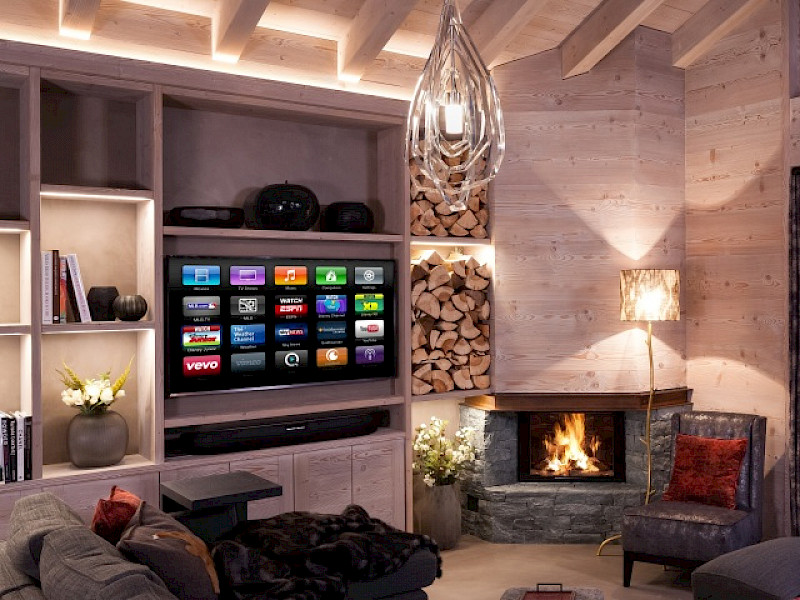 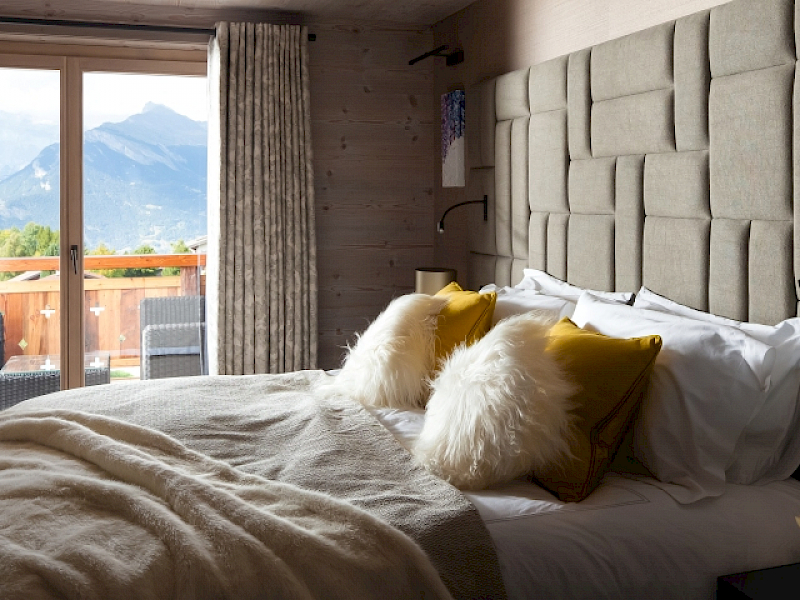 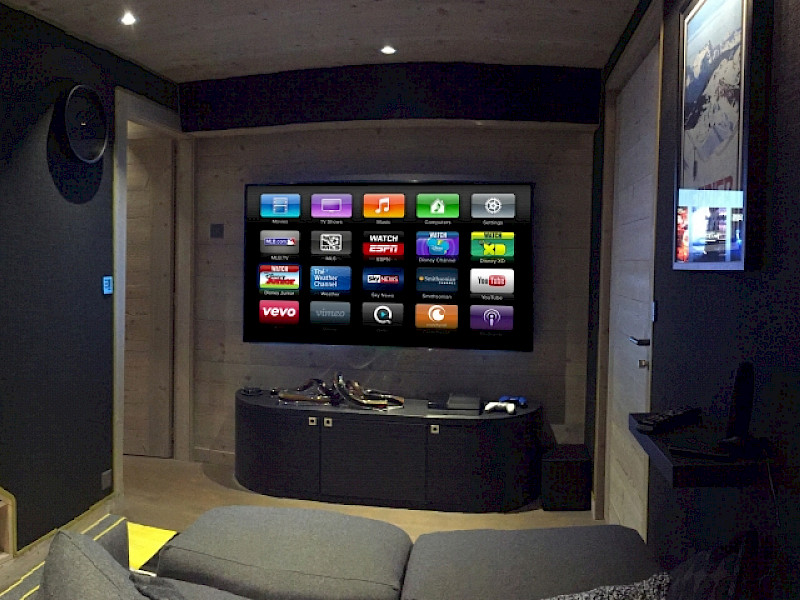 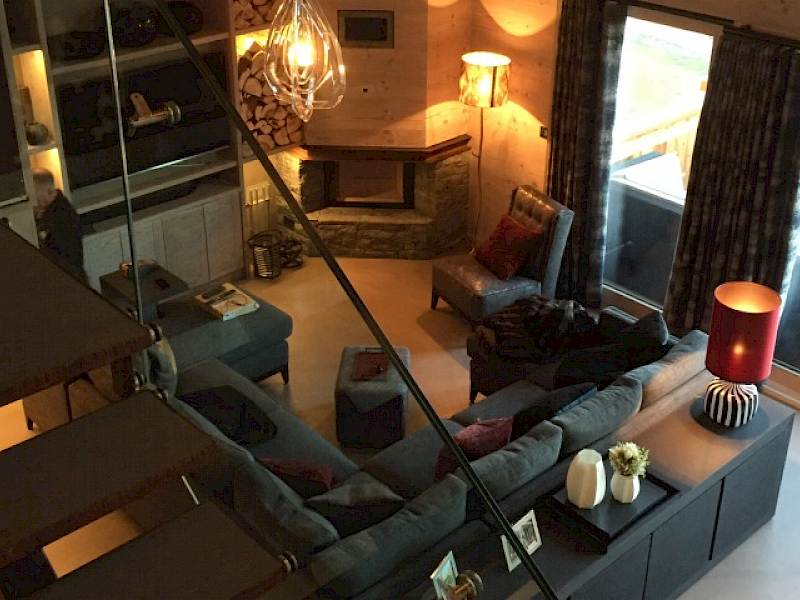 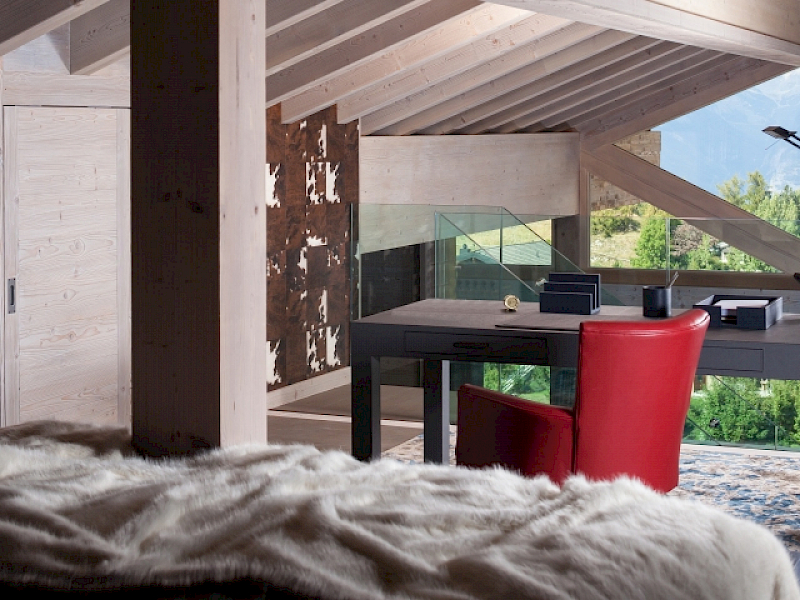 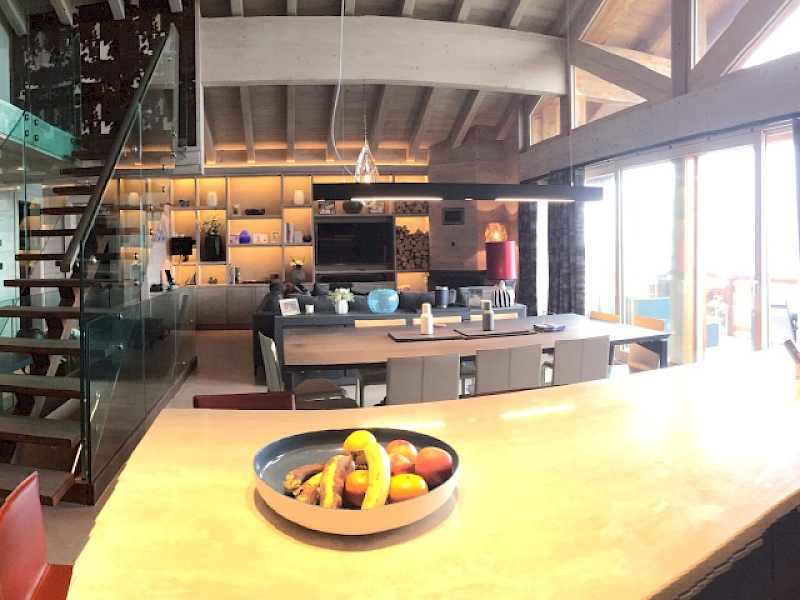 The project initially started with a requirement for a media room, music in a couple of rooms and the data network.  With the high level of quality interior design Grahams strongly recommended that the client install an intelligent lighting control system and explained the benefits of this.  The owner was concerned that this may over complicate the project and cause challenges with the local builders and electrical contractors but after reassuring the client if was not a problem for Grahams,  the project brief expanded and became a fully integrated chalet with Lutron Homeworks lighting control, a media room/ cinema , fully structurally wired for tv/data, CCTV, music throughout and a Control4 system to gel it all together.

As with every modern home, robust Wi-Fi and a good Data Network were essential and this was helped by the fact that TV, telephone and internet are delivered to the apartment on one fibre optic cable providing ultra-fast internet too. The client also wanted Apple TV and Amazon TV with the ability to access from their UK accounts.

Naturally everything needed to be easy to use with the Distributed Audio system capable of delivering streamed music from local NAS storage, from the Internet and radio too.  With the possibility of guests staying in the apartment without the owner there, it was essential that all the systems were intuitive and easy to use.

The quality of finish in the apartment was to a very high specification and everything that was designed, supplied and installed had to complement this with minimal visual impact.  Budget was of course important, but the right mix of value and performance was identified at an early stage and money spent where it provided the most benefit.

With two young boys aged 11 and 13, a media room was required to allow for watching films, television and of course playing with games consoles. This room was to provide a high level of comfort, audio performance and large screen TV.

The owner already had Sonos and Control4 in their London home so it made perfect sense to utilise this for the apartment.  A combination of Zone players, Sonos amplifiers and, in the two primary bedrooms Sonos Play bars were used for TV sound and audio too. In-ceiling speakers are installed in the two primary bedroom suites with kitchen, mezzanine, dining room speakers hidden and discrete.  In the main lounge a Bowers and Wilkins Panorama 2 sound bar was used to provide really good quality sound for TV and a local Sonos Connect device allows the Panorama to be used for music too.  Control4 was the obvious choice for providing consistent control from room to room and this also allows us to utilise Lutron lighting keypads to provide simple audio control in rooms like the bathroom (see photo of the Lutron keypad to show how simple this is).

The two boys’ bedrooms have portable Sonos Play3 speaker systems and these are also incorporated into Control4 and Lutron to provide simple on and off via Lutron keypads and also they get turned off when the whole “House off” function is activated when leaving the premises. This is incredibly powerful as it turns of all TVs and all the zones of music at the press of one button.  All Lutron “House Off” or “Bedtime” buttons have an “*” on the engraving which means the button needs to be pressed and held for 3 seconds to avoid any accidental shut down.

The media room features a 75” Samsung UHD TV, Arcam AVR and utilises Triad speakers. The LCR speakers are cleverly built into a high level angled bulkhead which keeps them out of the way and angled to the seating area. The rear surround are built-in to the services rear-bulkhead.  Even though the room is compact Grahams designed a stepped seating area and utilised the under-floor section for bass traps for handling low end room modes.  These are not visible because the lower sofa sits in front of the opening.

All of the AV equipment is fitted in a Middle Atlantic Slim5 rack in the under-stairs cupboard which is adjacent to the media room with the exception of the Sony PS4 games console which works much better with its Bluetooth and remotes if located in the room. Space was at a premium and the Slim5 is as narrow a 19” rack as one can get. The removable side panels make it easy to work on and provide neat and tidy cable management.

Control of the media room is via a Control4 Zigby hand held remote providing consistent operation in all the other rooms with TVs. The remotes also provide control of lighting and ventilation. When browsing music the client also uses the Control4 and Sonos apps on their IOS devices. Each bedroom “suit off” button not only turns off the lights but also shuts down music and TVs too.

Lutron Homeworks QS was installed to provide intelligent control of over 80 channels of LED lighting. Grahams also provided and specified a number of drivers and Linear LED components because the only way to guarantee reliable dimming without lamps flickering, one needs to know everything in the chain from the button press, control system, the driver to the LED itself. As already discussed the Lutron keypads also integrate via Control4 to provide extensive management and control of AV systems and more.

All the main windows have motorised shutters which are also controlled via Lutron and Control4. The heated towel rails in the bathrooms can be manually turned on and off from Lutron keypad (they are also timed when the owned is in residence) and the powerful timer features in Homeworks are ideal for this.

Bathroom fans are also controlled, coming on automatically as one would expect; at night time they are programmed to only come on by demand.  Small features like this make the experience of staying in properties like this just a delight. The Lutron system also controls space heaters in the hall cupboard for drying out-door ski wear saving energy and giving simple on-demand control too.

Serious consideration needed to be given as to how to support the project in terms of maintenance and the design needed to be done in such a way that the owner could understand and troubleshoot the systems if necessary.  A local PC was installed in the main rack to allow remote support and software updates to run on the local PC. This is really important because when one is doing firmware updates remotely, if the internet connection were to drop this could cause problems if a firmware update is interrupted. By doing a remote control of the laptop it will carry on doing the update even if remote connection is lost, so it is a better technical and safer solution.  Remote monitoring software also keeps a real-time tracking of all important IP network devices and advises the installer and the client of any devices that have lost their connection, which is vital for things like the CCTV.

What makes this project worthy of recognition?

Everything about this apartment in terms of technology was carefully thought through and because it was a new build there was no need for any compromise.  There is good infrastructure for “future proofing” and all of the wiring exceeds CEDIA’s wiring guidelines.  The design and detail on the lighting as previously described helps create a spectacular looking home.  All the technology is hidden where possible but without compromising any levels of performance.  Energy management is well catered for with various systems shutting down when not in use for longer periods of time.

Due to the location in the Swiss Alps very careful consideration was given to the quality of installation, labelling, heat management and remote support.

All of the wiring, termination and racks are properly labelled and everything is thoroughly documented allowing for future upgrades and maintenance with ease.  All of the network is monitored from London and is remotely supported too.

Whilst the client and their friends who have stayed there think it’s fantastic (we have already signed up one of the friends to do their London home since them staying there),  the comments of the interior designer who spent a week there this winter says it all. See the testimonial below.

“The system was amazing - worked incredibly well and faultlessly!  We aren't particularly tech savvy people, so probably didn't test to its full capabilities – but I plugged my hard drive into the Blu Ray for the cinema to access my movies from usb, which worked very well, other than that - Sonos and tv function used in dining room and our bedroom suite all worked well.

From what we used - fantastic job, well done! “