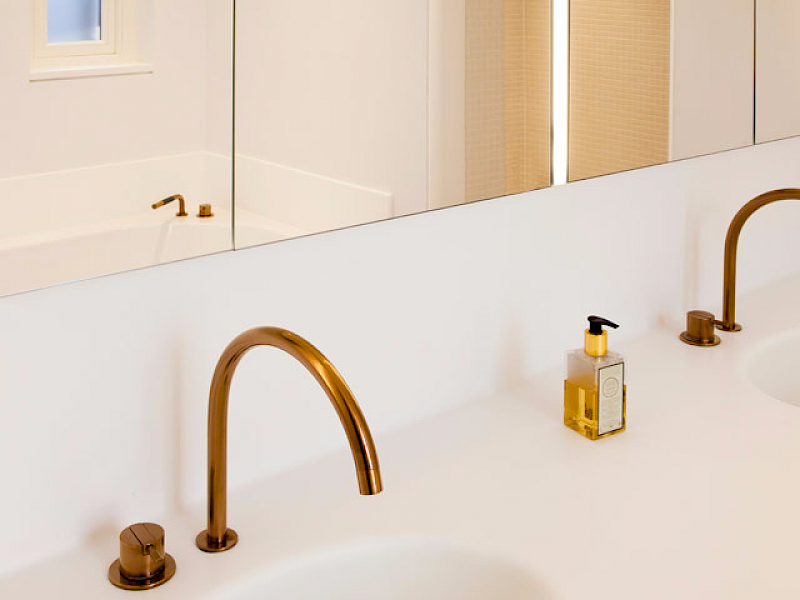 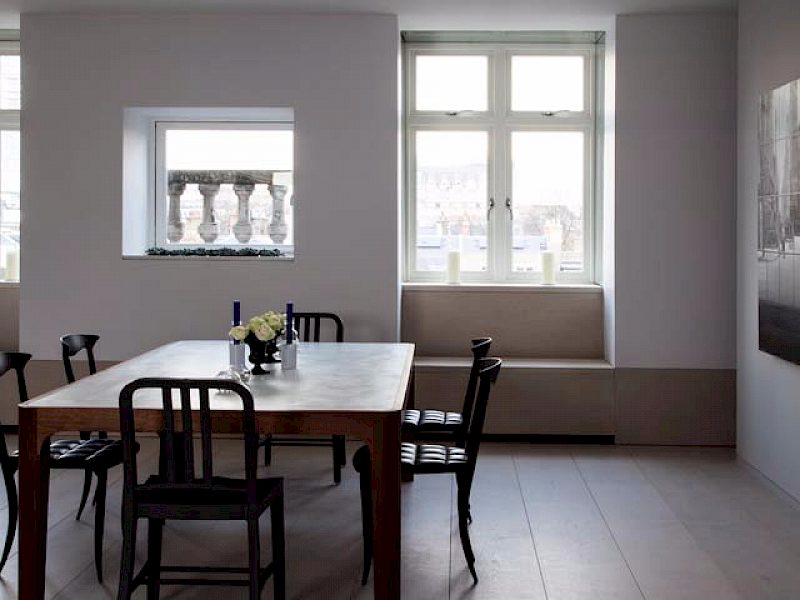 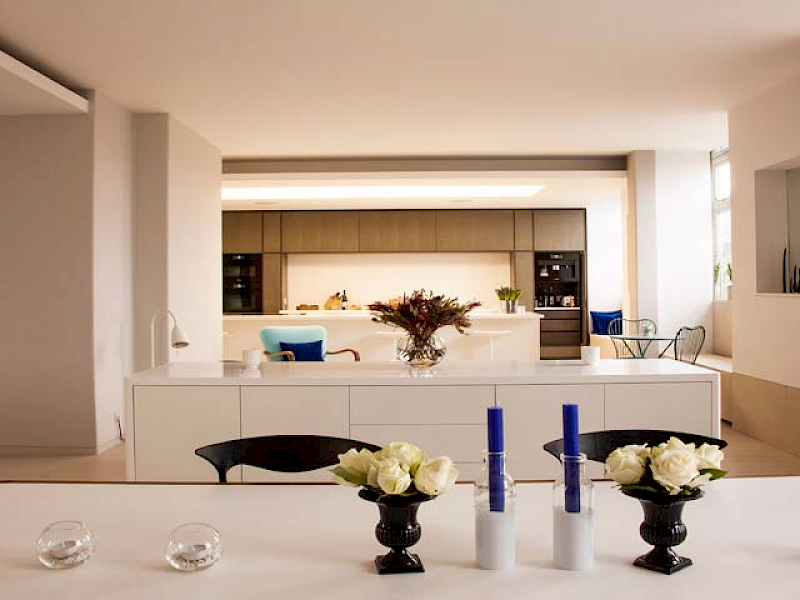 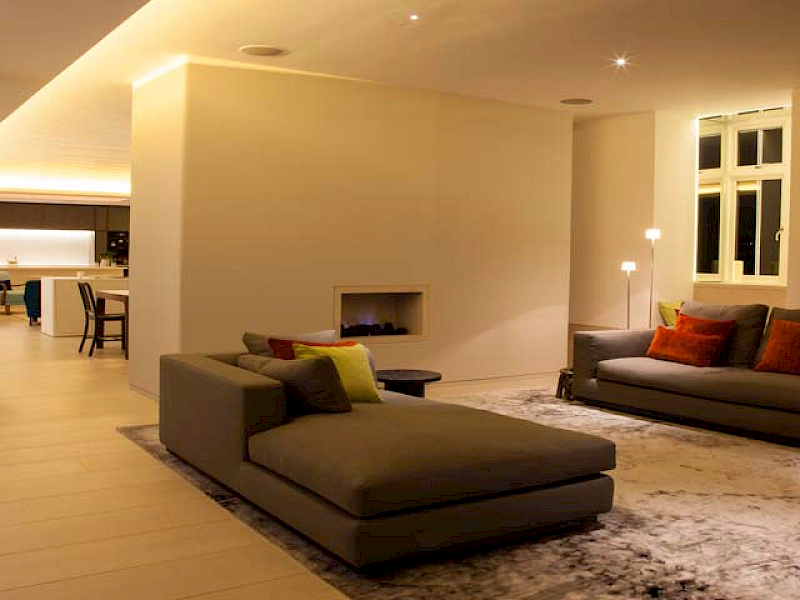 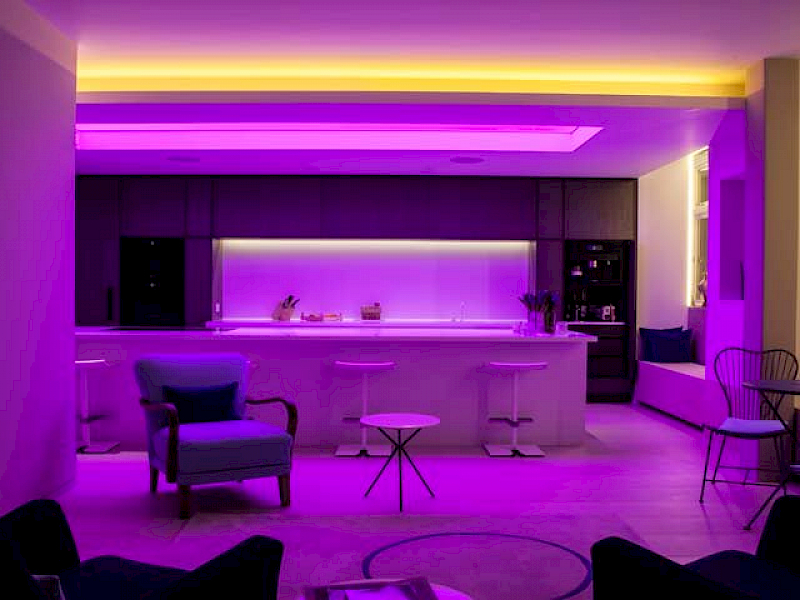 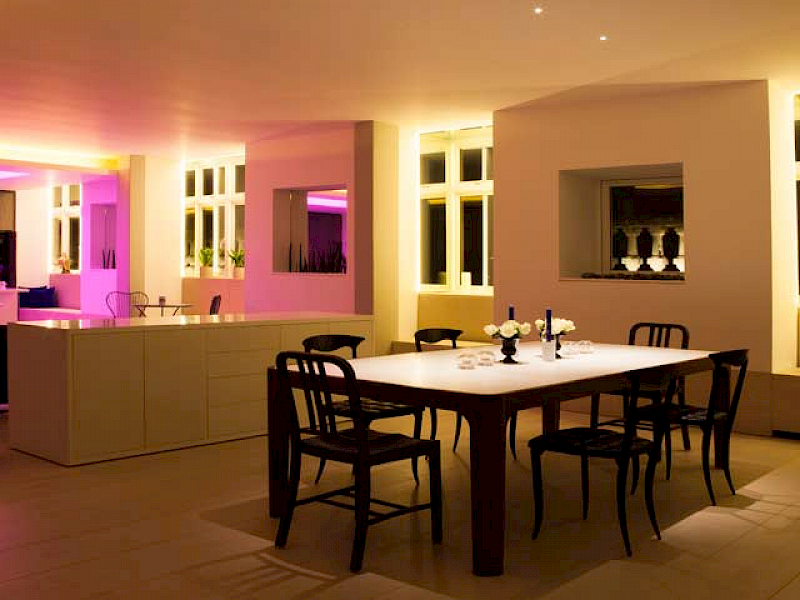 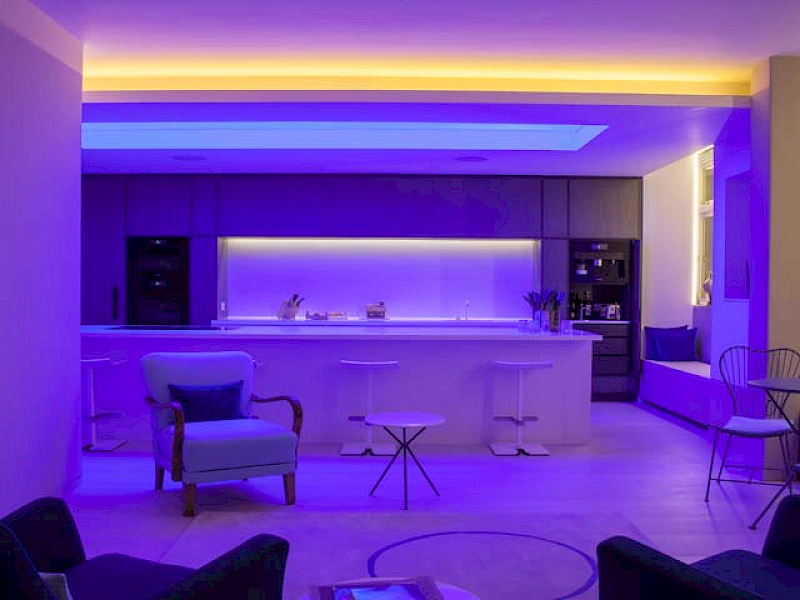 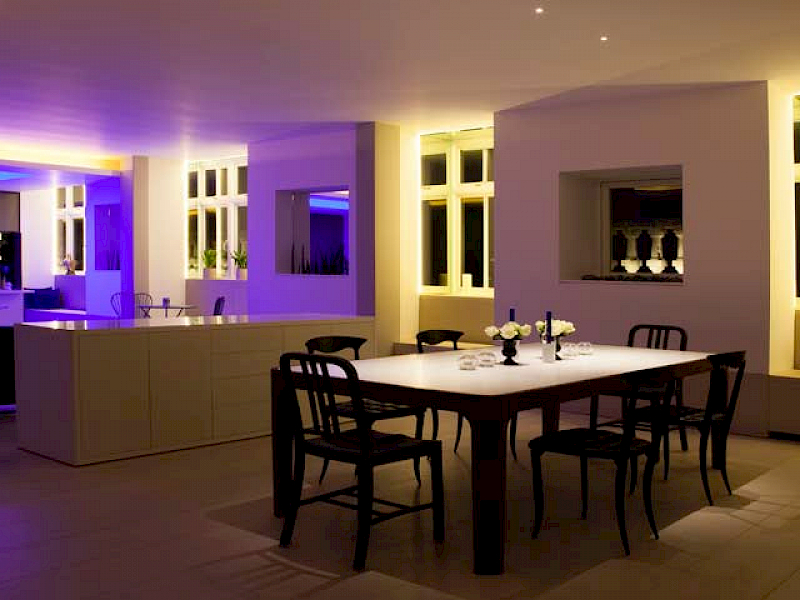 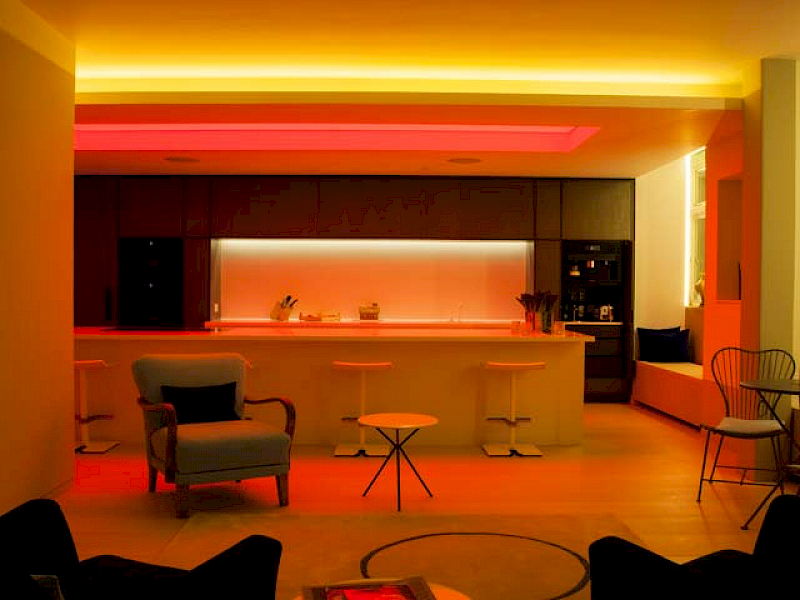 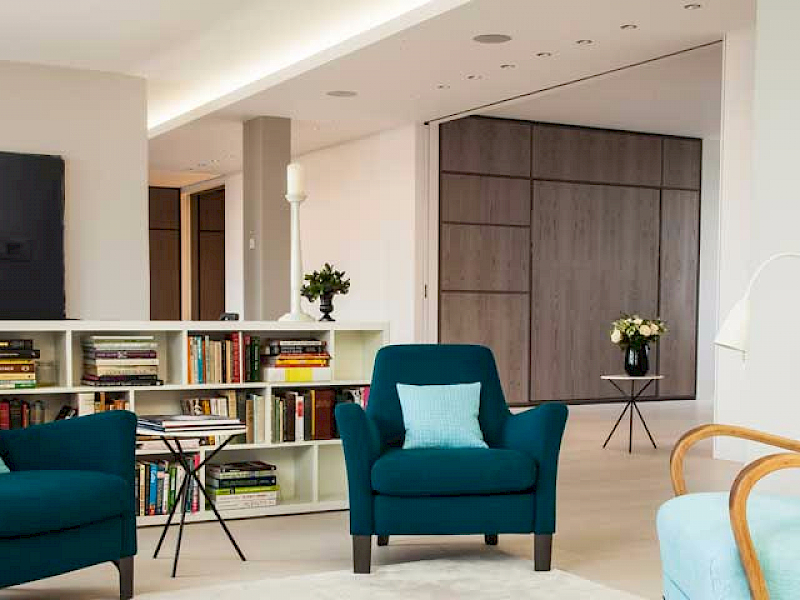 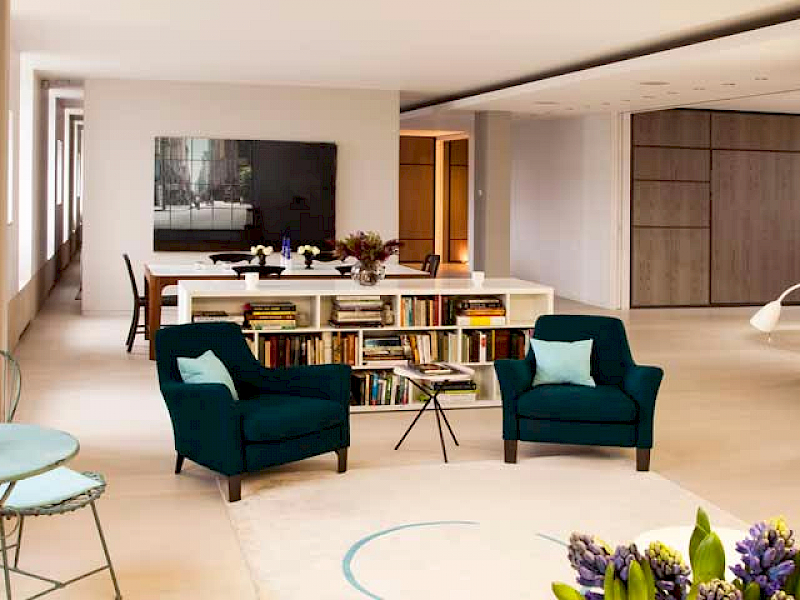 This is the third home we have completed for our client, the first one in 2005. The brief on this project was very clear. Good lighting design and control was crucial to the design of the apartment. Music was required in all rooms with a much higher level of performance in the Kitchen and main Lounge.  A really good TV/movie and music experience was also requested in the main Lounge.   As with every modern home, robust Wi-Fi and a good Data network were essential.  The apartment was to be very minimalist and for that reason the control system needed to allow for very little “wall acne” and integrate with the Heating, Lighting, Music and TV systems.

Everything needed to be easy to use with the Distributed Audio system capable of delivering high quality streamed music (using high resolution music files), as well as being able to stream music and radio from the Internet.  Although there was only a main TV in the Lounge, cabling was installed to all Bedrooms and also to the Kitchen area for additional HD distribution to improve re-sale values as and when the apartment might be sold.

The quality of finishes in the apartment was to a very high specification and everything we designed, supplied and installed had to complement this with minimal visual impact.  Budget is important, but the right mix of value and performance was identified (by demonstration) to ensure our client had the best in all systems where it was used most.

Having previously experienced a fully bespoke touch-panel control system in their previous two homes, the client was happy to use Control4 for this house.  The main reason was that the user interface is dynamic and 'app' driven thus saving time and cost in programming and future changes.

We used Lutron Homeworks for the lighting control in their previous homes and this is still our preferred solution as it provides excellent control, especially over LED lighting, which was to be used extensively throughout. We recommended a mixture of different temperature linear LEDs in the main ceiling so by mixing these we can achieve a variety of different 'feels' depending on the time of day.

In the main kitchen area a Barisol ceiling covers the whole of the central island. Behind here are 6 rows of linear LEDs providing bright white, as well as RGB to provide dramatic choice of mixable colours.  Just to be clear, these are not programmed to change automatically (although they could be), they simply give the home owner the ability to create different pre-set scenes using a mixture of colour. It looks spectacular in the evenings.  Whilst the apartment is very contemporary inside there are original external window niches, which were lit from the outside with a clever use of mirrors in the window recess to give a large sense of space when looking out over the central London skyline.

Heatmiser controls were chosen for the control of a mixture of water based and electric under-floor heating and because it could provide consistent control for this as well as electric towel rails too.  Integrating this with Control4 allows for central control from touch panels as well as a really neat and simple way of turning off 8 zones of heating from one button at the front door. The “Master Off” button on the Lutron keypad at the front door, when held down for 3 seconds initiates a house shut down, turning off all zones of music, turning off all lights as well as turning off heating control in pre-determined areas.  All of the Heatmiser controls were hidden in cupboards with neat remote temperature sensors to remove more “wall clutter”.

A Meridian Digital Theatre surround sound system was chosen using high performance Meridian DSP loudspeakers, which were neatly hidden behind a panel below the TV set. These speakers were also to be used for high quality music when the TV is hidden in the cupboard and we provided a mix of Linn Digital streaming solutions and some Sonos for secondary rooms. To get the best from the Sonos these zones were connected to a new Rotel multi-channel digital amplifier.

The kitchen and lounge were to be much higher quality so we used Linn devices in these areas. By also integrating with Control4 we were able to provide Spotify as a seamless source via Sonos and into the Linn streamer. This gave the owner the option of listening to studio master recording (via the Linn) or Spotify via Sonos.

When the owner's browse Spotify as a source the Control4 system routes the audio via Sonos digitally into the Linn and makes all rooms, irrespective of the main sources, work the same way. It is a very neat way of providing differing levels of audio performance and cost whilst keeping the operation consistent.

Lutron lighting keypads (also via Control4 Integration) allow us to provide very simple music control in the secondary rooms and these are programmed to 'follow' the adjacent room. For example, if music is playing in the kitchen (adjacent to the study or master bedroom) and you go into one of these rooms, turning on the music will start to play what is already playing in the adjacent zone. If there is nothing playing then we switch on to the clients favourite radio station.

In the main kitchen end of the apartment is an in-wall Control4 touch panel which gives central control and this is supplemented by a Contol4 hand held remote for general TV use and Ipads for portable browsing.

The Linn system allows direct Airplay or Upnp wireless streaming from IOS or Android devices as well as Apple TV in the main lounge.

Being in central London where space is a premium, we made use of all the “dead space” behind the TV where a special compartment was built for the data patch panels. The sub woofer is located at the top of the joinery in effect in the corner of the room with an open top to the joinery. This also provides ventilation behind the equipment rack to vent directly (using slow thermostatically controlled fans) to remove any excess heat from the AV rack space.

UPS (Uninterruptable Power Supplies) are installed to protect the network hardware and even though we only have a few zones of Wi-Fi we still used enterprise grade Ruckus equipment as this is so important with wireless streaming and Apple AirPlay.  A PC was installed on site to provide for additional remote support if needed.

Finally, PIRs (passive infrared sensors) are used to control lighting in certain areas and also provide email logging when people are in the apartment. The PIR can email the customer at which point they can check the IP cameras in the apartment to check who is there.

Everything about this apartment in terms of technology was carefully thought through and because it was completely “gutted” and refurbished there was no need for any compromise.  There is good infrastructure for “future proofing” and all of the wiring exceeds CEDIA’s wiring guidelines.  The design and detail on the lighting as previously described helps create a spectacular looking home.  All the technology is hidden where possible but without compromising any levels of performance, the high quality Meridian home theatre equipment for instance, is well hidden but sounds fantastic.  Energy management is well catered for with various systems shutting down when not in use for longer periods of time and good heating control assisting this also.

All of the wiring, termination and racks are properly labelled and everything is thoroughly documented allowing for future upgrades and maintenance with ease.  All of the network is monitored from Grahams and can be remotely supported if required.